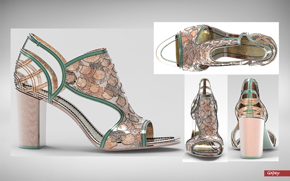 The winning design in Delcam CRISPIN’s footwear design competition
Delcam CRISPIN – in partnership with www.3DSHOES.com – has chosen the winner of its Global Footwear Design Competition. Ekaterina Gapeeva, a shoe designer from Minsk in Belarus, was chosen as the overall winner from the many entries, based on her design’s creative flair, commercial potential and impressive use of Delcam CRISPIN’s ShoeMaker software, the package used to create all of the entries.

The winning entries can be seen on the Delcam CRISPIN website at www.delcam-crispin.com/competitions/index.asp

Ekaterina’s design will now be 3D printed and showcased on Delcam CRISPIN’s stand, A36 in Hall 14 at the SIMAC exhibition taking place in Milan between 25th and 27th February. She will join the Delcam CRISPIN staff at the exhibition.

Ekaterina was delighted to win the competition, saying “My design was inspired by collections of Giuseppe Zanotti, Valentino, Stella Jean, Gucci and Chanel. I tried to express the natural beauty and loftiness of birds, with a combination of a feather’s thin quill and broad vane. It reminds me of a peacock or firebird. I only started to use the Delcam CRISPIN software four months ago and found design process in full 3D very exciting. I believe that it will change not only Belarusian but the whole world’s shoe industry.”

Natacha Alpert, a consultant from MIRAS 3D, was on the judging panel. She said: “This design has very interesting attention to detail in the upper design that makes it unique,” while fellow judge and independent footwear design expert, Rob Major added: “Ekaterina’s design is superb.”

Competition entries were submitted from both students and industry professionals. All the designers used Delcam CRISPIN’s ShoeMaker 3D design software to design the upper and sole of a shoe. Once these were designed, they were rendered using Keyshot 3D rendering software, which is integrated into ShoeMaker.

Delcam CRISPIN is the world’s largest supplier of CADCAM software to the footwear industry. It is the only supplier able to provide a complete solution for the 3D design and manufacture of lasts, uppers and soles.

In 2015 no longer does it take tens of thousands in designs, molds, runs, and the high cost of shipping for a small company to have their own shoe, it costs hundreds. Imagine Boy Scouts Of America with their own shoe brand “scouting.org” feeling empowered with their very own shoe not to mention going to level two with each children’s name all to be Made in America.