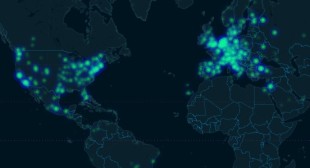 3D Hubs launches newest trend report, to which they’ve added a heat map of their 3,000 printing locations so you can get an impression of where 3D printing is popular in the world. Also new is the list of popular 3D printer models per continent. Some interesting stats.

Makerbot is undeniably dominating the worldwide 3D printers market by occupying the top spot in all regions except Europe. In the US, they are even making a rare clean sweep by holding both the first, second and third spots.

Due to the Makerbot, Stratasys is the market leader with 26% of the install base on 3D Hubs. However, RepRap and Ultimaker are not lagging far behind with respectively 21.6% and 15.4% of share of the install base. Finally, 10% of the registered printers on 3D Hubs are made by 3D systems.

[…] recently used a 3D printer and a biopolymer to create a tracheal splint and saved a baby’s life. A South African carpenter […]

[…] prominent people believe 3D printing technology is not ready for the home. We respectfully disagree. When you help us to succeed, you are helping […]