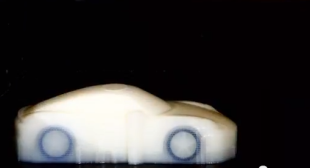 Here is Porsche’s latest offer:
A dream can only come true, if you give it a shape. Why not with your 3D printer? We offer you the Cayman as 3D printing data. Create, print and colorize your personal Cayman. And: we would love to see the results: Just paste a link to your pictures as a comment to this post.

The Porsche Cayman is a rear mid-engined, rear wheel drive 2-seat sports car produced by Porsche AG of Germany. First launched in the 2006 model year, the Cayman is a coupé derived from Porsche’s second and third generation Boxster roadster. Like the Boxster, most Caymans were assembled in Finland for Porsche by Valmet Automotive (the rest are assembled in Zuffenhausen, Stuttgart, Germany). Porsche’s Deputy Chairman, Holger P. Haerter stated that their contract with Valmet Automotive will end in 2012, and the Cayman’s production will be outsourced to Magna Steyr Fahrzeugtechnik of Graz, Austria. (Panorama, 2008). More recently, as Volkswagen assumed ultimate control of Porsche AG, that agreement fell through, and the production of both Caymans and Boxsters after 2012 will be in the former Karmann plant in Osnabrück, Germany, now owned by Volkswagen. However with 3D Printing Technology, we may be producing much of these Porsche’s ourselves!